Modems do not do Wi-Fi or VOIP telephone service. Depending on your ISP, you may have a modem as a standalone device, or, the functionality of a modem can be combined with that of a router into a single device called a "gateway" (or sometimes a "modem router"). See also, my introduction to routers. Too often, the term "modem" is used to refer to a gateway device.

Modems are computers and thus need a minute or so after being powered on before they are fully functional. Like all computers, the software they run sometimes needs to be updated. With cable modems, only the ISP can update the software (called firmware) in the modem. I am not sure how other types of modems work in this regard.

You can easily tell if a device is a modem by looking at it, both the back and the front.

This is an image of the back panel of a TP-Link TC-7610 cable modem. The coaxial cable jack is input, Ethernet is output. The circular connector at the bottom is for electricity. A router or gateway would have more than one Ethernet jack. A gateway might also have telephone jacks. 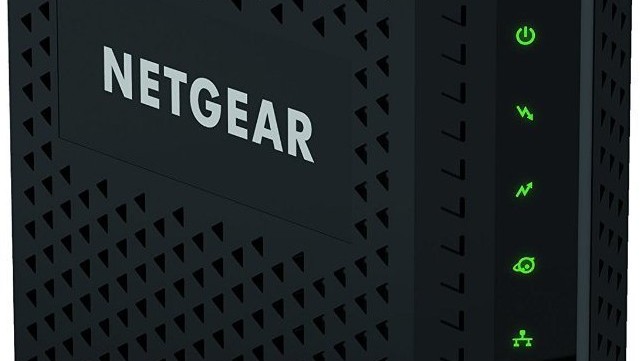 One nice thing about Netgear modems is that they use green to indicate a good status. Even without any understanding of what each light refers to, simply seeing that all the lights are green, shows that everything is working correctly. This is not true of all brands. Arris, for example, uses white and blue lights and they refer to the white ones as green in their documentation. Also, the lights on a Netgear modem are not too bright. I have lived with an Arris modem and I had to put tape over one of the lights because it was way too bright.

In January 2020 we learned of a flaw in modems that use a chipset from Broadcom. The flaw is called CableHaunt and, in the US, it is likely that very few modems will ever be fixed. My summary is on the Bugs page. It is very unlikely that either your ISP or the modem vendor will every say anything about this.

To know if your modem is vulnerable, you first need to do a port scan of it from the LAN side. If there are any open ports, other than the one used for its web interface, then it may be vulnerable. Try to connect to the port with a web browser and see what's there. If its a spectrum analyzer, you need to block access to the modem from the LAN side with your router.

You probably should avoid buying the Arris SB6190 and the Netgear CM700 modems due to problems with the Intel Puma 6 chipset. See these articles:

There is even a website about this, badmodems.com, but I can not vouch for it. In the same vein, the ApprovedModems.org website has a List of 71 Bad Cable Modems You Should Avoid Buying (June 11, 2020).

This is a miserable article: The Best Cable Modem by The WireCutter, last updated March 29, 2021. The author seems to have no experience with cable modems at all. Amateur hour. As for specifics:

Talk to your modem by me February 5, 2015. Those of us with separate modems and routers are likely to focus on the router and ignore the modem. But, like a router, a broadband modem is a computer with a web based user interface. And, like any device with a web interface, the modem has an IP address. You might think that to address a modem by its IP address, you would have to connect a computer directly to the Ethernet port of the modem. In fact, I have seen instructions for a cable modem that said to do just that. But this is not always the case.

Using a router to block a modem by me February 23, 2015. A follow-up to the previous blog (above) that described how IP address 192.168.100.1 is likely to provide access to a modem, through a router. This can leave an Arris/Motorola modem vulnerable to hacking from the LAN. But, there is a defense.

Best Cable Modems 2018 by Philip Michaels of Toms Guide February 14, 2018. I disagree about the recommendation for an Arris modem, but the article is a worthwhile read. Two good charts: cost of Renting vs. Buying a modem and Modem Compatibility With ISPs. I agree that the Netgear CM600 is a good choice. Its great that the problems with the Arris Surfboard SB6190 are mentioned. Also great is the heads up about the Linksys CM3024 and the recommendation to use a separate router and modem. The article, however, fails to mention any password protection offered by the modems. Netgear offers it, Arris does not. Finally, note that the links in this article are affiliate links, that is, Toms Guide gets a cut if you buy a modem via a link in this article.

A tale of two cable modems by me October 25, 2017. After I replaced an Arris cable modem with a Netgear model, these were my thoughts comparing the two. In short, I much prefer the Netgear modem.

How to Get the Best Cable Modem: Should You Buy or Rent? PC Magazine Jan. 27, 2017. Modems are measured by the number of communication channels. A 16x4 modem has 16 downstream channels and 4 upstream. 16 channels down can support speeds up to 680Mpbs. 8 downstream channels maxes out at about 340Mbps. 4 channels up supports roughly 130Mbps. Higher end modems are 24x8. The Netgear CM700 is 32x8 and advertised as supporting 1.4 Gigabits/second downstream.